I wanted to make my girls dog costumes this year, but I didn't want to break the bank in the process. As you know, sometimes it truly is cheaper to buy something already made than to buy the supplies and make it from scratch. Still, the cheapest fully made dog costume I found was around 8 bucks. I can do better than that!
So, off to Dollar Tree I went. I found a couple items that gave the costumes a base that I could work around, and therefore made them much easier to make. (Given that the girls were only going to wear their costumes for maybe 2 or 3 hrs max, I wasn't looking to spend hours and hours making these.) During my shopping trip, I found two items: a cute baby windbreaker jacket and a short sleeve dog jacket for, you guessed it, $2 altogether.
With a few modifications and added pieces, I came up with these costumes:
Heidi was dressed as an Olympic athlete. 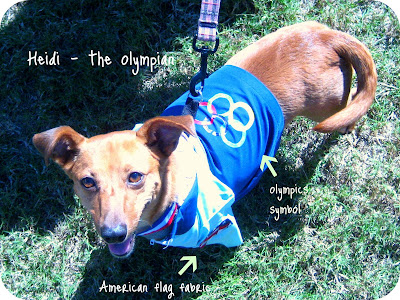 Jini was dressed as a young woman from the '50s wearing a poodle skirt. 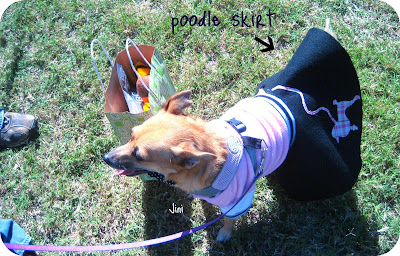 These pics were taken at Dogtoberfest yesterday where Heidi and Jini got treats and attention and competed in a costume competition. (Jini's poodle skirt won 2nd place!)
I was so happy with the way they turned out! :) It took barely any time or money to put the looks together.
If you're looking for a costume for your dog, read on and I'll tell you how I created mine.
Jini's Poodle Skirt Costume
Materials - Dollar Tree dog jacket ($1), felt for the skirt (on hand), fabric for the poodle decal and fabric for the fashion scarf (on hand), sticky-sided no-sew velcro (on hand, but I think it's around $3), scissors (on hand), stitch witchery and iron (on hand) 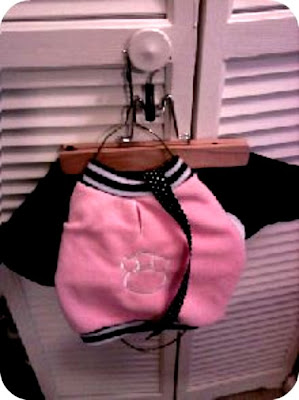 Since the jacket was already made, I just had to make her skirt. I simply cut out a large circle of felt. I eyeballed the measurements, and cut out a smaller circle in the center of the felt piece. Then, I cut a slit in the fabric and attached sticky velcro to the skirt. (I only took this one picture of the process, but I wrote in some instructions and shapes to give you an idea of what I mean.) 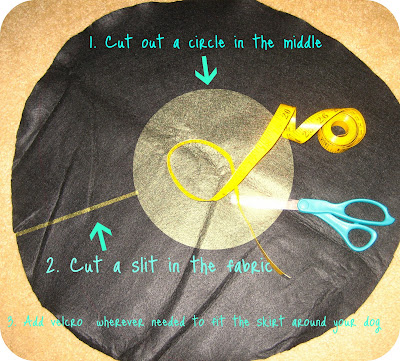 Then I wrapped the skirt around her waist. Where the jacket met the fabric of the skirt, which was around the middle of her back, I attached another piece of velcro. This helped hold up the skirt while she was wearing it. 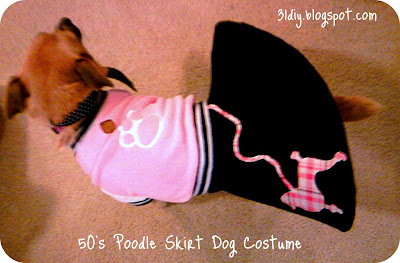 Then I cut a poodle silhouette out of some light pink fabric. If you Google 'poodle skirt', you can get an idea of the shape to draw. I then used stitch witchery and ironed the decal onto the skirt. For the neck scarf, I simply cut out strips of fabric, stitch witchery-ed them together, and loosely tied it around her neck.
Heidi's Olympic Athlete Costume
Materials - (12 - 18 month sized) Baby windbreaker jacket from the Dollar Tree ($1), white or clear contact paper (on hand), markers (on hand), scissors (on hand), stitch witchery and iron (on hand), and US flag fabric or flag decal for the arm ($1) 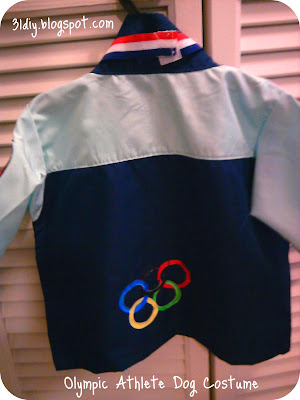 This baby jacket only needed one little thing to make it fit my Heidz. I cut about 2 inches off the sleeves. I didn't bother hemming the edges. I also added a bit of flag fabric to the sleeve with some stitch witchery. Contact paper came into the picture when I was looking for something to make the Olympic symbol. I didn't have all of the fabric colors I needed (i.e., blue, yellow, red, green, and black), so I simply  drew 5 rings on the contact paper and filled them in with markers. Then I cut them out and stuck them to the back of the jacket. I already had the medal on hand from the Dog Olympics last  month when Jini won best howler - she didn't mind if her sister borrowed it. 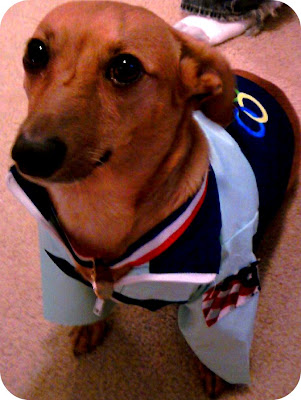 Some people at Dogtoberfest didn't "get it," but others did get the look that I was going for. One guy came up to take Heidi's picture and called her a Michael Phelps lookalike. Haha! :) Heidi is scared to death of water and she's not much of a pot smoker, but hey, at least he understood she was supposed to be an Olympian.  ;)
Good luck with your dog costume! Here is 1 more pic of the girls. 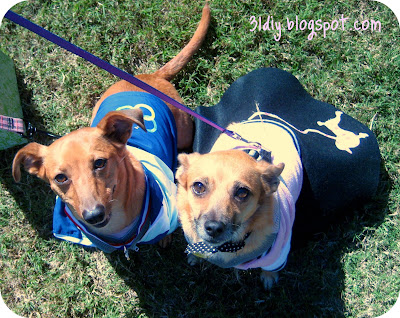 Disclaimer:
I also just want to mention that you should only make your dog a costume if you know he/she is comfortable wearing it. My girls are used to dressing up occasionally and tolerate it really well (actually, Heidi seems to enjoy wearing clothes). Also, be aware of hazards on your costume, like small accessories that, if eaten, could hurt your dog. Also, make sure that your dog is able to go to the bathroom while wearing the outfit. And if you live in a warm part of the country, ensure that your dog does not get overheated and has access to plenty of water. We all want our furry babies to be happy and comfortable, right! :)
I'm linking to... 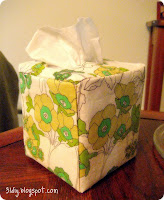